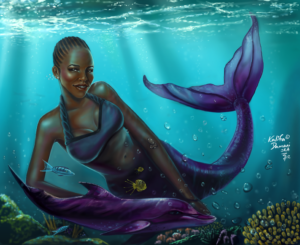 THE MERMAID
By: Barbara Goodjoin

The mermaid lured a man to sea,
she sang a song just for him as he dove beneath
the salty waters of bluest waves
and swam down deep to see the caves
of her castle home…
he went alone.
The man dove in without scuba gear,
mesmerized, as he was, by her voice in his ears…
he realized—to late—that he could not breathe
but by then, he had gone in much too deep.
She looked at him with lustful eyes,
he choked on water…and slowly …died.
His vision darkened…and then it cleared
he saw a light that beckoned him near.
A voice called out, “it’s not your time, son!”
Then, he was lying, on the beach, in the sun.
He was surrounded by folks who he did not know…
He looked for the mermaid that he had wanted so…
He was willing to die for her love and her touch.
He didn’t realize it would cost him so much!
He found her watching…from behind a rock in the sea
Her face was now contorted as she glared angrily–
She screamed like a siren, as she dived back within
the depths of the water with a flick of her sexy fin.
He thanked God that he had survived that day
and begged others to listen to the words he had to say…
When you see a beautiful woman beckoning from the sea,
you need to turn, just walk away and leave.
A mermaid may be beautiful and a delight to the eyes,
but she’ll be the end of you and you will hang like a prize
on the walls of her castle  on the ocean floor,
with the remnants of others who did not survive the lovely mermaid’s lore.